HIS LEGACY LIVES ON

Sadly, in 2006, Ted Ticknor, former President & CEO of Mr. Lube, lost his battle with prostate cancer. Ted was a dedicated leader, with a zest for life that touched and inspired everyone around him. He was also deeply committed to community giving and was actively involved with the Vancouver Prostate Centre – determined to one day find a cure.

In honor of Ted, and the thousands of men who are diagnosed with prostate cancer each year, Mr. Lube initiated the Ted Ticknor Memorial Award for Prostate Cancer Research in 2007.

In honour of this year’s 20th anniversary, the Ted Ticknor Award is presented to the entire organizing committee for their many years of commitment and dedication. It is thanks to their passion and efforts that the event has experienced such exemplary growth and success. 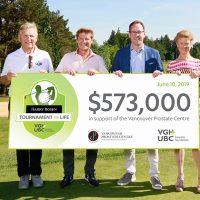