George Bowering and his dog, Mickey, in his Vancouver home.

Prolific poet and novelist George Bowering is happy to be alive.

“I really am,” he says, sitting in the living room of his Point Grey home. “There was a time when it wasn’t looking so good.”

Two years ago, Bowering was out with Mickey, his very shy two-year-old Bernese, dropping off books at the local library, when he suffered cardiac arrest, collapsing in front of a bus stop. Thanks to the quick thinking of a bystander who started CPR, and 14-year-old student Ivy Zhang who called 911 without hesitation, library staff, and the fact that the fire hall is just around the corner, George was rushed to Vancouver General Hospital (VGH) where a team of nurses and doctors was waiting for him, led by cardiologist Dr. Parvathy Nair.

The nurses and doctors worked hard, keeping the writer alive, employing a cooling machine that brought his body temperature down to 33 degrees Celsius, to “save the brain.” The cooling machine was purchased with a generous donation to VGH & UBC Hospital Foundation.

“I credit the series of high-level care he received, the combination of all of it, that saved his life,” Dr. Nair says. “From the CPR done in front of the library to getting him to the cooling machine quickly, it worked in his favor.”

“Yeah, they were wonderful – (VGH) is a remarkable place,” says Bowering, jumping in.

“We’re especially grateful for the person who bought that cooling machine,” adds Baird

Bowering temporarily lost the use of motor skills, but with the help of his wife, he was surprisingly back to doing his habitual New York Times crossword puzzles within a day after he was brought out of a 12-day induced coma.

The experience didn’t hinder him creatively. In the first 18 months after his cardiac arrest, the already prolific writer (he’s written over 100 books) published six books.

Dr. Nair say less than 50% of people survive cardiac arrest and have a meaningful recovery.

“He’s very lucky to be alive,” she says. “And he’s had an excellent recovery, better than average.”

While his work schedule has not been affected, Baird has noticed a slight change in his personality.

“He has always been a bit goopy about our marriage, but he’s much more goopy now,” she says laughing. “Yeah definitely…”

So what was the first thing he wanted to do once he left VGH?

“And to get back at my desk in front of my computer…to get writing again.”

What do you know about cardiac arrests?

Donate now to help patients like George on their journey to recovery. 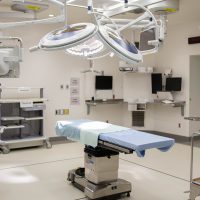