Two of Vancouver General Hospital’s best employees are stopping dangerous bacteria from spreading by putting their nose to the grindstone — literally.

Meet Angus and Dodger, Canada’s top dogs when it comes to seeking out and preventing the spread of Clostridium difficile, commonly known as C. diff. 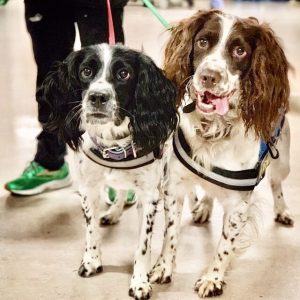 “I’ve had C. diff and I know first-hand just how damaging it can be to someone,” says Teresa Zurberg, Angus’ handler. “Preventing it is incredibly important to the health and safety of patients.”

Angus and Dodger are the first two canines leading the Canine Scent Detection Program at VGH.

Thanks to donations the program launched in 2016 with Angus as its inaugural sniffer. From November 2016 to August 2019 there were 1,241 areas searched, with 45% of them pinging at least one alert.

The detection dog and handler are accompanied on their rounds by an infection preventionist, a member of the hospital’s cleaning team (environmental services), and a senior representative from the unit who can ensure that any alerts are immediately actioned.

“Every alert is a teaching moment,” says Teresa. “After a positive alert we educate the present staff, patients and families on the dangers of C. diff and how best to avoid contamination in the future.” 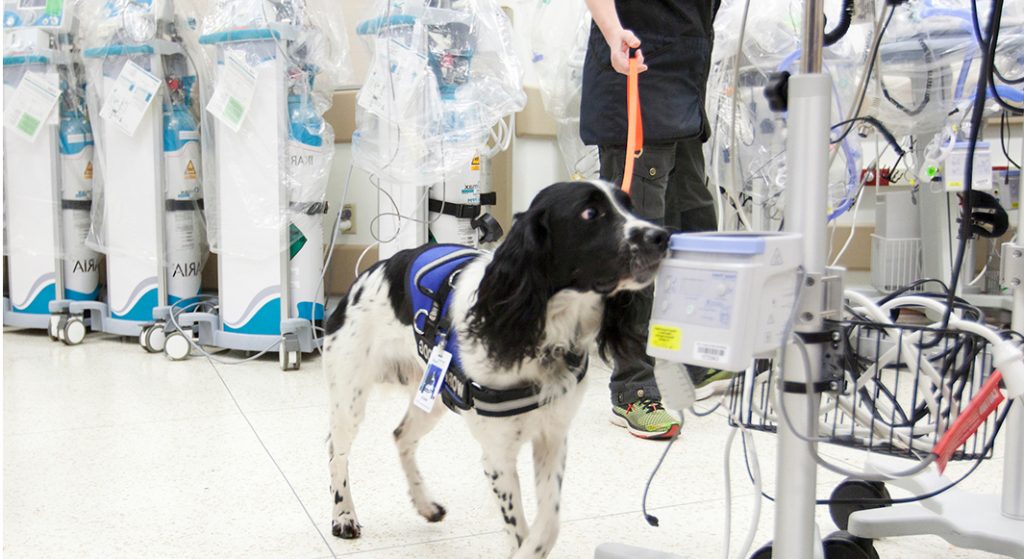 Anyone can catch C. diff, but it is most commonly acquired in a health care environment with immunocompromised patients. The antibiotic-resistant bacterium can cause symptoms ranging from fevers and abdominal cramps to life-threatening colonic inflammations.

Utilizing trained and certified canines such as Angus and Dodger (and soon-to-be certified Rudi), the dogs are discovering where C. diff colonies survive and thrive and alert staff using nonverbal cues to avoid upsetting patients.

Recently, Angus discovered C. diff in a toilet paper dispenser. As only the outside of the dispenser was cleaned, the discovery of bacteria in hard-to-reach places such as this has led VGH to refine its practices.

Teresa is hopeful the Canine Scent Detection Program continues to grow. Their third dog, Rudi, is being trained right now and Teresa aims for him to be certified before the end of the year. As part of the Program’s expansion, two puppies have been recruited as its latest trainees. One named Traveller and the other now named Finn, picked by the public in a recent naming contest.

“We’ve also been all around BC and out to Ontario with Angus to show what he can do,” says Teresa. “He’s helping Canadians everywhere.”