The story you are about to read is about Jennifer Kelly, a young mother who faced an uncertain future after she was diagnosed with breast cancer. While Jennifer’s story ends well thanks to the care she received at VGH and UBC Hospital, she now faces a new battle – surviving as a former cancer patient during COVID-19.

This “new normal” is a daily struggle for Jennifer and her family, but there are ways we can help people like Jennifer during this unprecedented time. Click here to learn more.

It was July 4th, 2015. Jennifer Kelly, 33 at the time, was happily preparing a surprise party for her mom’s 60th birthday. She and her siblings had a wonderful dinner planned. Then the phone rang…it was Jennifer’s doctor’s office. They needed her to come in immediately.

During the journey, she felt she already knew in her heart what it was — Jennifer was diagnosed with breast cancer.

“I lost two friends to breast cancer. I know not everyone makes it. And it just so happened I got my news the night of mom’s birthday party,” says Jennifer. “So I went to this dinner and acted normal. The next morning, I told my family. Everyone was shocked and upset, and wanted to know what was next.”

The next three years of Jennifer’s life became about this fight.

Fighting against the odds

Breast cancer is the most common cancer for women in BC. In 2019, an estimated 3,890 women in this province will be newly diagnosed and 695 will die of it.

Jennifer was the one in eight Canadian women who develop breast cancer in their lifetime. And even rarer was her young age and the fact no one in her immediate family had ever had breast cancer before.

She felt run down, unlucky, and resentful of her body for what felt like a betrayal. Facing down this deadly disease was almost enough to keep Jennifer feeling down indefinitely. But when she looked at her children, aged one and four at the time, it hit her.

“I had to survive for them. To have a memory of their mother — not just a photograph or a story from a loved one. A real memory,” says Jennifer. 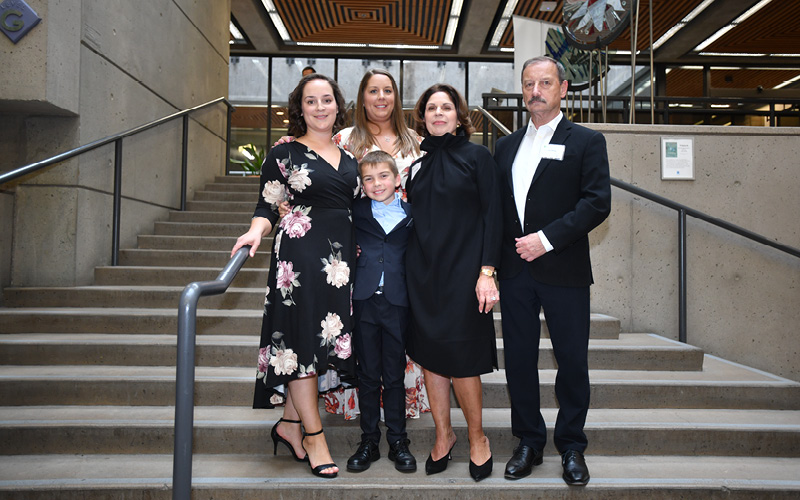 Jennifer Kelly smiles with her family

Jennifer opted for a double mastectomy to remove both breasts which was paired with 21 bouts of chemotherapy. She wanted to dot her i’s and cross her t’s to ensure the cancer wouldn’t recur.

“I became a full-time patient. That was my job,” says Jennifer. “And I remember people — friends and family — asking, How are you doing? Fine. What’s new? Nothing. Absolutely nothing is new because my life is consumed with chemo treatments and blood work and scans and labs and feeling like garbage.”

Before her double mastectomy, Jennifer never associated her femininity with her breasts. But after the removal was complete, all of life’s little moments around the female body became magnified and impossible to ignore.

“I remember going to clothing stores to try to try on things that I thought would be good, and just being in fitting rooms and just crying because nothing would fit me properly,” says Jennifer.

She also struggled with returning to her favourite activities such as yoga, as not only would the clothing not fit properly but she would feel self-conscious about her hair loss and having to remove her wig.

So in September 2016, Jennifer made the decision to have breast reconstruction surgery at UBC Hospital by Dr. Sheina Macadam.

“In November 2016, we went to a big fundraiser gala for my children’s school and I wore this beautiful dress. And although I hadn’t had full surgery yet, the tissue expanders made me feel like a woman again,” says Jennifer. “I still had short hair — my hair was still growing back — but I felt really good about myself again.”

Breast cancer patients often face the reality of a mastectomy to surgically remove the breast(s). Approximately 2,000 mastectomies are done annually in BC, with 65% of breast reconstruction surgeries in Vancouver Coastal Health (VCH) being performed at UBC Hospital.

Studies show that emotional, social and functional well-being, vitality, body image and general mental health are improved in women who have immediate or delayed breast reconstruction surgery after their mastectomy.

“I’m very happy that I was able to see Dr. Macadam and have it all done,” says Jennifer. “Because at the end of the day she gave me my life back. She made me feel like a woman again. Like myself again”

Support cancer patients make the most of their recoveries. Donate now.

After VGH saved his life, Garry Walker is giving back
Read more