Brad Baylis and his girlfriend Carla Lewis at Burns Lake

Brad’s story is part of a series on new Brain Bolt technology, made possible by donor funding, being pioneered at Vancouver General Hospital

Brad Baylis, 39, was driving to his home in Prince George after spending a weekend at the Bulkley Valley Fall Fair with his girlfriend Carla Lewis. But he would not make it home that night.

A moose ran out of the woods and Brad’s SUV hit it head on, sending him careening into a ditch nearly a kilometer down the road. The crash knocked Brad unconscious. The commotion alerted a nearby resident who immediately called 9-1-1. A passerby also stopped to help until first responders arrived on the scene.

Brad was airlifted to Vancouver General Hospital where the medical teams evaluated his injuries — which were severe. He had fractured his cheek, orbital and nasal bones, the upper palate in his mouth, and his forehead. His brain had extreme swelling and bleeds. When Dr. Myp Sekhon first looked at Brad’s CT Scan, he couldn’t believe what he saw.

“When Dr. Sekhon went over the initial CT scan with Brad’s mom and I, his brain had become so swollen that it had nowhere else to go,” says Carla. “All of the little ridges in his brain were completely gone and it was starting to push down on his brain stem. He had little bleeds all over the place and a more severe bleed on his right lobe.”

Brad’s prognosis at this time was grim. He had less than a 10% chance of survival. If he did make it through, there was a high chance he would be in a vegetative state.

Dr. Sekhon and his team decided to use the Brain Bolt, equipped with a new micro-dialysis catheter not found anywhere else in Canada.

The brain bolt is a cutting-edge brain monitoring device. By placing specialized catheters into a patient’s brain, the medical team receives vital second-to-second information including oxygen levels, blood pressure and, since summer 2018 a new feature; nutrient supply. This level of sophistication is not in use anywhere else in Canada — and only a few places globally — due to the level of expertise and expense required.

“We put the bolt and the catheter into Brad’s brain and the numbers we got back were astounding,” says Dr. Sekhon. “The micro-dialysis numbers revealed that his brain cells were under severe stress and actively degenerating. They were being starved of oxygen and nutrient supply.”

Immediately, this information changed Brad’s direction of care. The team brought Brad’s body temperature down, increased the nutrient levels in his blood, increased his heart function, and controlled his ventilator very specifically. In a few hours, Brad’s brain cells started to pick up and function properly.

“Everything got better in his case,” says Dr. Sekhon. “On day seven he came out of his coma, which is unheard of in a case this severe.” 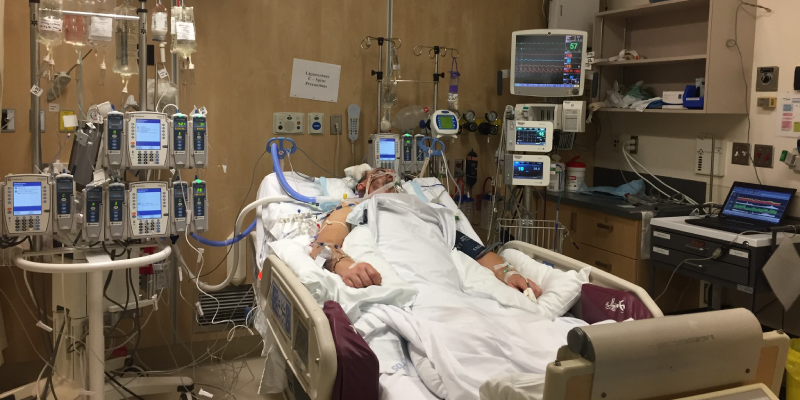 During those seven days, Carla didn’t know if Brad would ever wake up and if he did, what kind of function he would have. She was terrified her partner would be lost to her either way.

“They took him off the sedative and it wore off the next morning,” says Carla. “Gratefully, I was with him when he woke up and he gave us the thumbs up when we asked him if he was OK.”

Carla describes this moment as one of the most unbelievable experiences of her life.

“The only thing I can compare it to is like watching your child being born. It was just this surge of all different sorts of emotions,” says Carla.

Brad had survived, but there was still a lot of work to be done. He needed facial reconstruction surgery for the extreme damage he sustained in the crash. He also needed physical rehabilitation to help him walk again. So Brad was referred to GF Strong Rehabilitation Centre, the provincial leader in rehabilitation services to get him back on his feet.

“His progress at GF Strong was unbelievably fast,” says Carla. “By the time he left the hospital he could sit up and move his arms and legs a little bit. He went into GF Strong in a wheelchair. A week later he switched to a walker, and four days later he was walking on his own. In October, less than two months after his accident, we walked all the way around Stanley Park!”

In November, Brad returned home, just in time for Christmas.

Brad has returned to his life in Prince George and is feeling very close to a full recovery. While he has ongoing vision issues, he has returned to the Brad everyone knows and loves.  He doesn’t suffer from headaches or other common issues associated with head injuries. He feels so lucky to have not only survived the crash, but to be able to continue his lifelong adventure with his partner Carla and to be an active parent to their children, Holden, Bodie, Grier and Levi.

“My birthday is on December 16 and it was different this year,” says Brad. “My kids asked me, Dad, what do you want for your birthday? My only response was, I just want hugs.”

For Dr. Sekhon, stories like Brad’s are why he does what he does.

“The greatest reward in the world for me is seeing a patient go back to their family and their friends with a good quality of life,” says Dr. Sekhon. “That’s huge. Those are kids that wouldn’t have had a father if Brad didn’t survive. And that’s what this is all about.”

Innovative new ideas like the Brain Bolt don’t come from any one person. They come from a community of innovators and investors, using their time, talent, and financial support to create system-wide change. And you are a vital part of that community.

We need your help to fund innovative research and vital medical equipment to help patients like Brad get expert help when they need it most. Learn more and donate today.